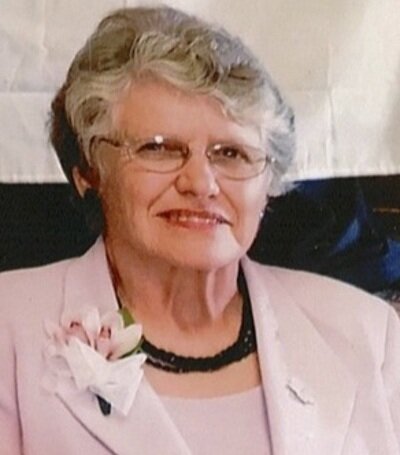 In Loving Memory of Mavis Weber

Mavis Ialeen May was born on February 28th, 1940 to Edgar and Evelyn (Riner) Smale at the J. Riner farm north of Wadena., SK. She grew up on the Smale homestead north of Kylemore with her two older brothers Glen & Lawrence and two younger sisters Marlene & Nina. Mavis started school at North Kylemore, then finished her grade 12 at the Grey High School in Wadena. She worked at the Red & White Store, the Wadena Bakery and Robinsons while participating in the Wadena 4H Grain Club. 4H is how she met Francis Weber. Mavis and Francis married August 13, 1962 at the Wadena United Church. In 1964 they welcomed Brian Arthur into their family and in 1965 brought Harvey Dale home. Both boys brought great joy to Mavis. In 1967 they moved off the Weber-Wirtz family farm and moved East of Wadena to build their own farm. Mavis resided on that farm until 2013 when she and Francis made the decision to move into town, as her Alzheimer’s had progressed. In 2014, Mavis moved into Pleasant View Care Home where she lived until her passing on March 23, 2022. Mavis had the highest ethic of care, putting her life’s work into her husband, children, grandchildren, family, friends, and animals. Many trips were taken all over the world, dances were had, large family & friend gatherings, meals made, machinery driven, material sewed, and love given. Mavis was predeceased by: her parents, Edgar & Evelyn, her father and mother in law, Frank and Thelma, her brother Lawrence and sister Nina. Those who will continue to cherish her include: her husband Francis; Sons Brian (Linda); Harvey; Granddaughters Raeanne (Orin) Emily and Isla; Alyssa (Ryan) Abby and Harper; Michelle (Dylan) Rylee and Ruby; Her siblings, Brother Glen, Sister Marlene (Reg), Sister-in-law Marilyn, Brother-in-law Gordon and his children; Stacey, Leanne, Jennifer and their families, and Sister-in -law Ada (Bernie). She is also survived by numerous extended family and friends. Funeral Service 1:00 P.M. Friday, April 8, 2022 The Chapel of Narfason's Narfason's Funeral Chapel & Crematorium Wadena, SK For those wishing to view the Funeral Service virtually may do so on Narfason's Funeral Chapel & Crematorium's Facebook Page (CLICK HERE) Donations in memory of Mavis may be made to: Alzheimer Society of Saskatchewan 301-2550-12th Avenue, Regina, SK S4P 3X1 or The Pleasant View Care Home P.O. Box 10, Wadena, SK S0A 4J0 Those wishing to send cards of sympathy and comfort may mail them to: The Weber Family P.O. Box 626, Wadena, SK S0A 4J0