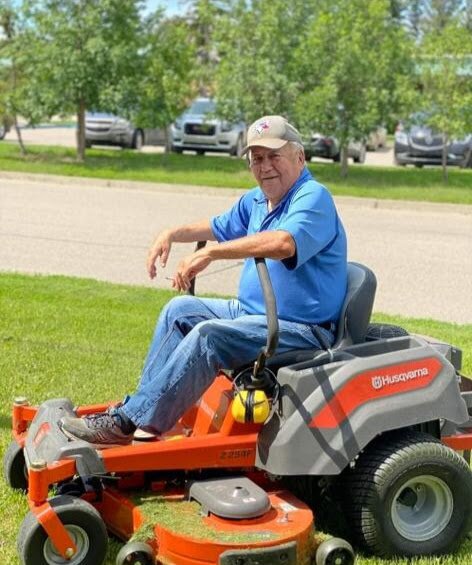 Leonard James Harasen (aka Len, Lenny and Lenski) was born on July 31, 1938 at home to Rose and James Harasen. Home was the 3rd Generation farm near Wroxton Saskatchewan. Not too many years later Len’s sister Sheila came into the world and Len quickly learned his favorite new game, ”tease the little sister”, which he practiced with the same passion that he gave to everything, right until his last days. Lenski worked on the farm helping both his dad and grandfather. He also went to school in Yorkton where he excelled at extra curricular activities, especially snooker, drinking moonshine, smoking cigarettes, playing baseball, going to dances, fighting and chasing girls. It was during the “chasing girls” phase that he met the love of his life, Joan Bosovich and chasing girls was off the table. (he kept with the other pursuits for many many more years). While there was just Len and Sheila on the Harasen side, the Bosovich clan was considerably larger. John and Adeline had 8 children and farmed near Rama Saskatchewan. Joan had 2 sisters and 4 brothers (Olga, Stella ,Carl, Ron, Norman, Eugene). Len fit in well with the brothers and was looking forward to his annual “crop checking” drive with Norman and supper at Ashley and Tara’s after. Len and Joan tried their hand at farming, but that was not going to be their destiny and Len went to school in Saskatoon to become a Radiologist. Little known fact, around this time he also worked driving taxi. In addition to driving taxi, he framed houses, and also helped out on the farm. After completion of his degree he worked in Yorkton in the Radiology department where he also drove the ambulance. Len and Joan were married and had their first child Timothy, who sadly passed away as an infant. A few years later through a clever set of trades for future prospects and cash consideration, they acquired the most awesomest son ever, James (yes, he wrote this). Soon after they loaded up the station wagon and headed East to Wawa Ontario (Wawa means “wild goose” in the Ojibway Language. Len had taken a position at the hospital in Wawa and Joan took care of Jamie, who was apparently a lot of work, and also worked many part time jobs. This was home for 11 years. During this time Len and Joan spent many passionate hours golfing, snowmobiling, curling, bowling, playing darts, playing cards and visiting with friends. Len, a gifted athlete and dedicated “student of the game” accumulated hundreds of trophies for Golf, Curling, Darts and Bowling. Little known fact, Len also played broom ball during this time. Len moved up the ranks in Wawa and was promoted to Assistant Administrator. Always the student, he read numerous management books, took Toastmasters, the Dale Carnegie training and worked hard to excel in management. Eventually Len moved back to Saskatchewan, where he was the Administrator at the Langenburg hospital. Len and Joan found some of their best and closest friends in Langenburg and continued to curl, fish, hunt, camp and spend a lot more time with family. Len was also gifted musically and played guitar, fiddle, accordion and almost any other instrument. He always enjoyed playing with the band at weddings and jamming with family during reunions. In 1985 Len and Joan moved to Wynyard where Len was again the administrator at the hospital. While they continued to curl, golf rapidly became their dominant sport. Wynyard’s golf course, was however “a dirt track” at the time (literally, they had sand greens). Len and Joan spent countless hours organizing charity bingos, planting trees and continually working to build the course that is here today. Sadly, in 1988 Joan passed after a battle with Cancer. While Len was devastated, he still focused an incredible amount of time and energy on both playing golf and sitting on the golf course board. Len was pretty good at the game and held the course record for many years.

Len, Warren and Graham played many rounds together and eventually the students surpassed their teacher. Len was still winning tournaments and playing pretty competitively into his 80s. 2022 was the first year he didn’t play. Up until the pool hall closed, it was Len’s 3rd home, (the golf course was number 2).Len spent thousands of hours, playing snooker, golf and 3 Spot. He had his cue in a locker there and a dedicated spot at “the first table”. When he wasn’t playing golf, he was busy mowing lawns, building and repairing golf clubs, building bird houses and watching TV. Len was a dedicated and passionate Riders fan and had season tickets for many years with his best friend Elmer and Elmer’s wife Laverne. In addition to all things Rider, he was also an Ardent Leafs fan. In fact Lenski was accidentally sent to hell when he passed. Satan paid him a visit and saw that he was smiling and happy. An annoyed Satan asked him why he was happy and he replied, “I’m from Saskatchewan and it’s always cold, it’s wonderful to be warm”. Satan was quite annoyed by this and cranked the temperature to freezing. Thinking that this would really annoy Lenski he went to check on him. Lenski was drinking and partying and having the time of his life. Satan screamed at him and asked why he was celebrating. Lenski replied, “if Hell has frozen over, it means the Leafs have won the cup” While Len wasn’t a hockey player himself, he coached hockey, excelled as a ref, managed the refereeing in Langenburg, was active on the Monarchs board and was a goal judge in the old Arena for many years. Len was passionate about politics, both in Canada and the US and enjoyed a good political discussion at any time. He was a regular at “coffee row” and it was an essential part of his day. He loved conversation and spent many hours touring around the countryside with Ron and Barry and others. Len was quite good at presenting and was a regular Master of Ceremony for weddings and other events. While he had a natural gift for the gab, he spent many hours preparing, and reading joke books and finding the perfect quote and anecdote for each occasion. Len loved hunting and fishing and especially enjoyed the annual trip to Jan lake with Elmer, James, Garth, Kevin and others. He was always prepared with his filleting board and giant pan to make a shore lunch. Although he wasn’t farming, Lenski loved the farm (more than just crop checking) and was actively swathing and combining into his 70s. He didn’t know the “price of rice in China”, (one of his many sayings), but could tell you the price of wheat, barley and canola. Len was fortunate to have many friends who constantly checked in, called, brought him borscht and helped him in so many ways. (Thank you). Len was fiercely independent, incredibly stubborn and lived life the way he wanted, right until his final days. He will be missed, but now gets to join again with his true love Joan. Len is survived by: His son James Harasen and his wife Sonja; Granddaughters Jonelle, Danae and Olivia; Sister Sheila and husband Dave Stuart; Joans brothers and sisters, Stella and Tom (passed), Ron and Darlene, Norman and Elda, Olga and Jim, and many nieces and nephews. Len is Pre-deceased by: Parents Rose and James Harasen; Son Timothy; Wife Joan; Joan’s brothers, Eugene and wife Phyliss, Carl.

with snacks and refreshments